If i had to describe this week it would be Information Overload.
This week has been less about actual coding and more about discovery.

TheNewBoston Youtube channel. This dudes channel is packed with programming tutorials from Ruby to Java to Android. I actually discovered his channel when I was trying to learn more about Android programming. I love his tutorials because he keeps them short and sweet most are under 5 minutes. Videos that go on for more than 10 minutes start to lose my attention. So if you’re one of those people you learn better by watching instead of reading then this is a great channel to cover the basics. I even think you will get a kick out of sense of humor, he’s kind of funny.

Koding.com. I’m not certain how long this site’s been around, I just received my invite last night but so far this site is really, really awesome. It’s a combination between a cloud IDE and social networking platform for programmers, it’s pretty badass. For me a Python n00b, I love that it gives me more time to focus on learning and writing code. I spent way too much time searching for the right IDE (which I still haven’t found).
Another big feature is their community. They have topics on everything web related like CSS3, HTL5 and etc. Topics are beautifully laid out in a dashboard like grid so you can easily follow topics that you’re interested in. I’m following JQuery, mongoDB, PHP and Python if you’re curious.

Bottom line it’s a awesome site and I really think you should try it. But please note it’s currently in beta so from time to time you may experience a few issues but I can say with confidence I think this site will take off in a major way and become the next big thing.

So whether you’re a Python, PHP, or Ruby developer this site is for you.

Oh and in regards to my Python coding. I did do a tiny bit of coding and I mean tiny.
I’ve never written a Python Class before, this is actually my first attempt.

Well it’s my second week with Python and to be totally honest compared to the previous week this week didn’t go so good.

These days work is overlapping into my personal life. I have multiple projects and approaching deadlines that’s interfering with my learnings.

But with the bit of time I was able to carve out I got to say things got a little frustrating.
I thought I was going to be able to find a few free IDE’s like with PHP but that wasn’t the case.
Plus those fancy Python frameworks that I spoke about last week worked fine on localhost but I couldn’t get them up and running on my server.

Grrrrr but if this is part of the learning curve that’s cool I’m sure the info is available somewhere and with time I will catch on, but dang I was searching the web like a mad man trying to figure this out.

So you’re probably wondering, “Soooo Joe, what did you do this week”? Well I found this article about CGI programming on TutorialsPoint.com that was pretty simple and straight forward so I ran with it.
I didn’t have to install anything extra. I had a CGI-BIN ready and available so the Python functions I had previously built could easily be run within this directory.
I even took it a step further. I moved my files outside of the CGI-Bin and inside another directory created a .htaccess file with the following handler.

My Python script outside of the CGI-Bin was accessible and executed perfectly. I don’t know if this normal or in regards to security is it safe. I’m just happy that this week wasn’t a total bust.

So all in all I have to admit I don’t feel like I kicked butt this past week, if anything I got my butt kicked.
But that’s cool the 4th of July is right around the corner and I plan to use some of the off time to crush out some code. So looking forward to week 3

Well it’s been a full week since I’ve started working with the Python language and I’m proud to say that I’m off to a great start.

I did what I’m sure most of us would do and pushed the textbook a side and jumped right into trying to develop something.
So far I’ve installed and played around with both Django and the Bottle frameworks.
From the few articles and comments I’ve come across I believe the Django framework maybe the industry standard amongst the Python development community.

But in my opinion if your looking for a Python framework with a smaller learning curve Bottle would be my suggestion. But note I haven’t  tried CherryPy yet but looking at the documentation it seems pretty similar to Bottle.

So in regards to the week 1 goals I set for myself I can with confidence check this one off the list.
My experience with the Python language so far has been a great one. I really like it. I like the fact that the syntax it not hard to understand. And I like that it does enforce a bit of a strict structure.

For example if you want to use a Time function you have to import it first.
I also like that with Python, GUI programming is possible, I just read about this so my knowledge is extremely limited when it comes to this topic. But it’s nice to know this option is available if I ever think about going down this road.

Well my week 2 goal is to build a simple website. Right now I don’t think this will be a problem. If anything it’s trying to carve out the time to do so.

Getting on the Python Train 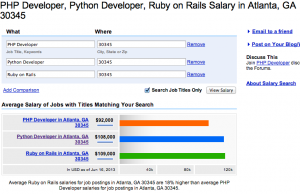