I’m sure I’ve mentioned sometime before that I’m a big fan of Twitter. I think Twitter has done a great job with their API, and the documentation for their API. They’ve made it fairly simple for developers to create Twitter based applications without jumping through a lot of hoops.

Well below is a bit of code I’ve used in the past to make status updates to Twitter. If your familiar with cURL then you’ll see that its pretty straight forward. The end result examines the HTTP code to determine if the status update was successful or failed you can comment this part out if you wish.

But before you go plowing away with the code I think it would be a good idea if you make yourself familiar with their documentation. They have a few rules that could save you some heartache down the road.

Change of plans. I decided to take an opportunity I came across yesterday.

Let me explain. I subscribe to Tech Crunch via twitter, that’s my way of keeping up with who’s, who’s and the what’s going on in the tech world. Well I saw a post they made yesterday about a new twitter IPhone application that was coming out or maybe it was just being renamed, I can’t remember but you get the idea, right?  So I thought why not give it a try. So I went to the Itunes App store via my IPhone and  downloaded the app. I played around with it for a while and quickly became very happy with the functionality. It had a butt load of options and was totally ad free. For the longest I had been using Echofon which wasn’t.
Any who, one of the features I played around with while testing was the photo posting. Photo posting is probably one of the most important feature for me. I figure I can text my posts in if needed.

So to test this feature out I added a test twitter account to the app and posted a random photo from my IPhone. The photo showed up immediately which is great, but when I took a closer look I realized it posted the image to Yfrog. WTF, I was kind of irritated for a little while and wonder why in the heck would they use that site, I hate that site. So I went back to the app to see if there where other options I could select from that would allow me to change this out. Echofon has that feature, so I assumed they would also. Now hold your hat on what I’m about to tell you next, it’s a shocker. Not only did they have several options to choose from, they also had an option that would allow you to add your own custom API URL. Yea that’s music to my ears. First off I love using API’s and secondly I just so happen to have a image hosting site that posts to Twitter and Facebook. So that was it, I knew my night was on lock. I took a pause for a few minutes and then went straight to Burger King and grabbed a couple of those $1.00 double cheeseburgers, came back to the house and started coding my ass off. I think I went to sleep around 4 am, but had to get back up by 9:00 am, I had some shares of stock that I was trying to dump before the market bottomed out.

So to make a long story short I completed building the API for my site sometime around 5 p.m. today. It took longer than what I expected because the market went running today. If you’re curious I took home an extra 315 bucks today. But I have everything working now. You can now post images to your Frin.ly account from Twitter’s IPhone app. I’m not advertising the API right now because I want to take sometime to revamp the site before I start to let people use it. I was looking at some of the code and some of it didn’t make since to me, and I was the person who wrote it. Go figure.

Anyway I said all of this to say that I’m off track right now and things will probably be pushed back another week or so I think. But I’ll keep you posted.
Later,
Joe

Something kind of interesting happened today. I was going through my log files and noticed a query for “joe Tinsley woodland park” the query originated from “Medford, Massachusetts”. Woodland Park was an elementary school located on an air force base in South Carolina that I attended when I was a kid. I take it that someone from my past is trying to locate me. That’s pretty cool. The crazy part is I just noticed that I don’t have anyway for anyone to contact me via my website… Ha! I make the craziest moves sometimes.
Well I’ve mentioned all of this to say If you’re looking for a way to pull Geolocation Data from a single IP address try IPpages.com’s APIs. I’ve been using them for some time now and the service is pretty good. It does require some programming knowledge to the extract the data from the XML results.
Please let me know if I can help with any programming questions (PHP only!). 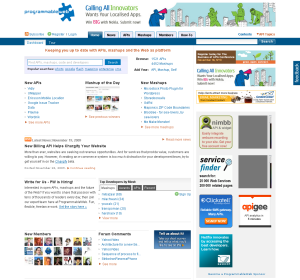 Programmableweb the shopping mall of API’s and probably one of the best websites in the whole wide world. Programmableweb.com is basically the shopping mall of API’s, they have the low down on about every API on the web, well maybe just the really cool ones. APIs are properly organized in categories so you’re able to flip through and find what you’re looking for quickly. They offer API related news and a RSS subscription feed so your can keep up on what’s new.
When I’m project free I sometimes come back here to see what’s new searching for a reason to start another project. I’m a project junkie, that’s my thing. Sitting at the computer hour after hour doesn’t bother me. I love coding and working with API’s, not sure why, I just do. (sorry got off topic)
But let’s say for example you’re thinking about starting a financial website and you’re not sure which way to go. Well there’s a financial category listed that will allow you to pump some really interesting data into your site. You can get instant access to AmeriTrade data, stock quotes or to recent filing data, which is pretty awesome.
If you’re really looking to get your project (or mashup) off the ground start here, I’m sure there’s something that could help spark a idea.

I ran into something very, very interesting today. Google Favicon API
(A Favorite Icon API). It’s an API that allows you to pull websites Favicons, plus the API dynamically converts the image into a PNG format. This actually comes at a great time because I was just thinking the other day that since I have the option to add offsite URL’s to my site now. Would’nt it would be supa cool if I could also included their Favicon? To beak it down if you look into my site’s right side navigation you will see the “Links” category. Well I thought it would be nice, I mean supa cool if I had a script that could automatically include the corresponding sites Favicons.  And BAM! Thanks Google Favicon API. I wrapped this APIs up with some cURL and a little PHP and now I have a working PHP function. I don’t know much about the Google Favicon API but it looks like it’s been around for about a year. So it’s a good chance that this API could suddenly up and move or disappear all togehter. Basically what I’m saying is I don’t know how long the good times will last. So in my opinion I suggest you consider the use of this script temporary until you can get the time to build a much reliable one yourself.

I’m experienced in server side and client side development, and have developed key analytic applications that have been used to examine search engine trends across multiple verticals.

I’ve earned a Google Adwords Professional Certification and a Yahoo! Search Marketing Ambassador while working at this Top Secret Faculty.
I majored In Management Information Systems and received my Bachelors Degree from Auburn University in 2000.

I enjoy working in the search Marketing Industry but most of all I enjoy building applications that support this industry.

I believe my area of expertise is in identifying and creating solutions that help people become more successful.