It’s official Apple has approved my first iPhone App.
So yesterday morning I checked my email and was pleasantly surprised to have received a email from iTunes stating that my “app has been approved and the app status has changed to Ready for Sale:”

This was probably the best news I’ve had in along time. Building/creating a iPhone App and having it included within the Apple App Store was a long time dream of mine. And for it to actually happen is a big deal for me.

So what’s my next move? Well I don’t know. What I’m currently thinking is if I should

I know you are suppose to crawl before you run…but man I sure feel like running right now.

Anyhow if anyone is interested. I submitted my app on the 23rd around 6 pm EST and it was accepted  on the 26th around 8 am EST.

Here a link my game  “High or Low – Card Game“, please give it a download but also keep in mind this is my first app

Ok sooo I’m somewhere between 23 and 24 days into learning Swift.
I have already ditched my original project and started a new one.
The original project just didn’t feel right to me so I put it on the self for right now
(yeah I agree, I’m probably not making much since right now).

I try to develop projects that I feel good about, things that I can actually use or better yet like to use.
I think that’s the trick to this development thing. If you can become one of the few that are lucky enough to work on something that you enjoy, that you’re passionate about, you’ll go a long way.

Anyhow so I pivoted and decided to make a card game app.
The objective is pretty simple. You basically need to guess if the card dealt is higher or lower then the original card…  it’s play off of the old drinking game “High or Low”.

I’m pretty much done with it. The final step is submitting it to the App Store, which I have no idea how that process works. But if everyone goes as planned I should be submitting no later then Friday morning. 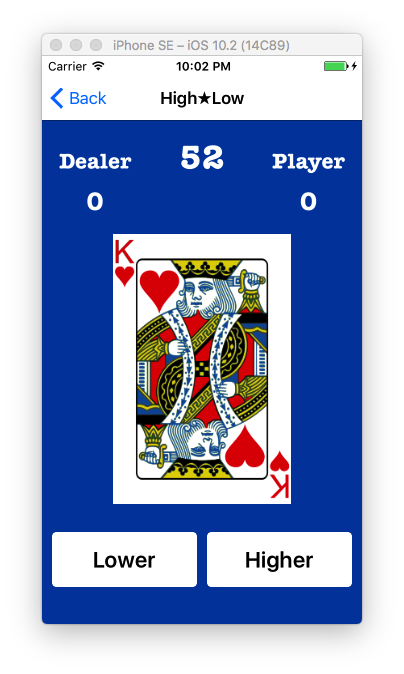 I’m back at it again, trying to learn Swift and IOS development.
This is basically my second attempt, I tried it back in 2015 but fell of track because of work commitments. This time around I’m pretty obsessed with getting something into the App Store.

In my opinion the learning curve this time around is a lot less steep. I mean there’s still a  hell of a lot to learn syntax, frameworks, and for me Xcode. But nowadays there’s way more places to learn from then a few years ago. i.e. StackOverflow,  Udemy and even YouTube.
I’m taking the dev route this time and building everything via code instead of using the Storyboard.

Thats one thing I do remember from my first time around is that the storyboard even though appears to be helpful can sometimes be a hassle.

The big dilemma I’m faced with now is coming up with a solid worthwhile project.
Right now I’ve been fiddling around with a College Football Trivia app (screen shot included).

Don’t laugh at the UI, I know it sucks.. but I figure that’s something I can circle back to once I get everything working properly.

Ohh and one other thing that stinks. For these past couple of days I’ve been testing everything via the simulator. In order for me to push my tests to my phone I will need to upgrade my IPhone to the newest operating system (Im currently on 9.3.5). Grrrrr. I hate the new operating system. Specifically  the way you reply to SMS messages now. Man .. why did the change it 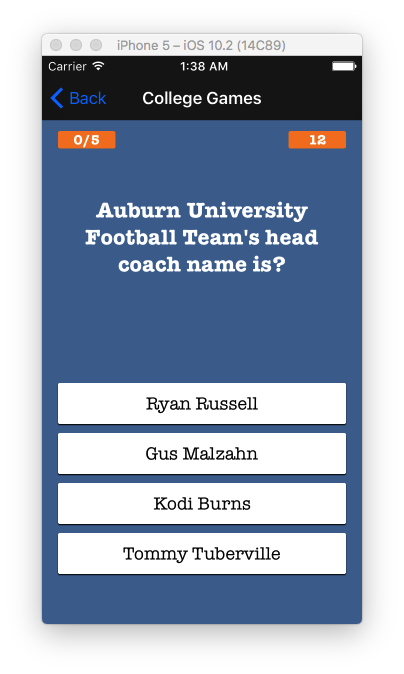 Get Keyword Frequency with PHP

So it been about a month since my last post.
I think 2 out of the previous 4 weeks I’ve been sick (food poisoning one week and a sinus infection the other).

Okay so….New screencast!
Well in my newest video tutorial I demonstrate how to get a websites keyword frequency with PHP.
Basically keyword frequency is the number of times a keyword or phrase appears on a single Web page.

This video is titled on YouTube as “Get Keyword Frequency with PHP”.

New screencast!
Hooray! Part 3 of the Build URL Shortening Service with PHP series is here.
This is the final video in this series.

In this final video we go over the “Unique Key Id creation and Setup”.
In my opinion this is the brains of the whole operation.

If needed I’ve placed the finished code on my Gitub account.
https://github.com/josephtinsley/URLShorteningService

This video is titled on YouTube as “Build URL Shortening Service with PHP (Part 3)”.

Part #2 of the Build URL Shortening Service with PHP series

New screencast!
Part 2 of the Build URL Shortening Service with PHP series.
I actually just got down uploading part 3 of this series so I will be making it available on the blog shortly.
Mainly in this video we start the backend scripting process and even go through “Flat File database Setup”.

The video is kind of lengthily coming in at around 11 minutes and greater so if your familiar with with PHP feel free to skip ahead.

This video is titled on YouTube as “Build URL Shortening Service with PHP (Part 2)”.

Thanks and Merry Christmas!

New screencast!
No tutorial that Im working on this turned out to be a series.
Seems like anytime I do a project it ruuuuuuns way to long so i end up converting it to a series.

So this PHP tutorial is part 1 out of a 3 videos series which I demonstrate how to Build URL Shortening Service with PHP.
URL shortening is a technique used to make a URL substantially shorter and still direct to the necessary page.

This particular PHP tutorial goes over the “FRONT END BUILDING PHASE” the part needed to send the long url to the applications.

This video is titled on YouTube as “Build URL Shortening Service with PHP (Part 1)”.

This particular PHP tutorial goes over “The calculating of the Simple Moving Averages.” Basically the final steps needed to calculate the averages for a given set of days.

Listed on YouTube as “Get Simple Moving Average with PHP (Part 3)”.

This particular PHP tutorial goes over the “The Calculating of the Closing Price SUMS” the steps needed to calculate the sum of a given set of closing stock prices.

This video is titled on YouTube as “Get Simple Moving Average with PHP (Part 2)”.

New screencast!
I’m working on a new PHP tutorial that was a bit longer then what I expected so I’ve decided to split the file up making it into a series.
This PHP tutorial is part 1 out of a 3 videos series which I demonstrate how to calculate a stock’s Simple Moving Average using PHP.
Simple moving averages (SMA) are the most basic of the moving averages used by day, swing and investment traders.

This particular PHP tutorial goes over the “SETUP PHASE” the actual the steps needed to gather the historical stock market data needed.

This video is titled on YouTube as “Get Simple Moving Average with PHP (Part 1)”.